Derric J. Johnson serves as a member of the senior administrative team at Crossroads and is founding director of the Equity & Justice Institute. 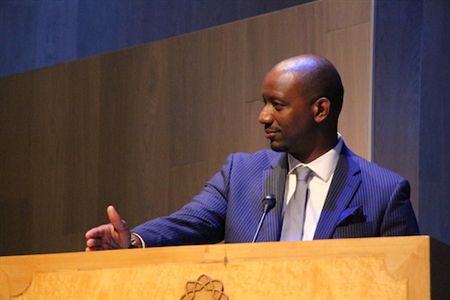 Under his leadership, the Institute oversees social justice advocacy and equity education on campus, in collaboration with School and community stakeholders, to make an impact on local, national and global issues.

Prior to this position, Derric was senior deputy of public safety and justice for the Office of Los Angeles County Board Supervisor Mark Ridley-Thomas. During his tenure, Derric’s numerous legislative achievements include: establishing the Civilian Oversight Commission of the Sheriff’s Department to increase transparency and policing accountability and to decrease officer-involved shootings; leading the efforts to reform the largest probation department in the United States; advancing policy initiatives to improve deficiencies in cultural competency and systemic implicit biases; instituting the Fair Chance Ordinance for LA County that would eliminate restrictions on employment opportunities based solely on criminal convictions; and attaining a $30 million increase in state allocations for court-appointed dependency counsel to improve protections for foster youth in California. He also procured $5 million from the state’s Juvenile Justice and Crime Prevention funds to support restorative justice and community-based programs to divert youth from the juvenile justice system.
Derric was appointed by the Los Angeles County Board of Supervisors to represent the Second District as a commissioner for the Los Angeles County Human Relations Commission; he was recently elected vice president. The 15-member commission is engaged in research and education for the purposes of reducing prejudice based on sex, age, race, religion, national origin or personal handicap and fostering civil peace and intergroup understanding among various communities within the jurisdiction.

He serves as a board member for Brilliant Corners, a nonprofit supportive housing agency providing for individuals with developmental disabilities and other special needs in the San Francisco Bay Area and Los Angeles County, including individuals transitioning from homelessness and institutional settings and homeless veterans. In addition, Derric is an executive council member of the Children’s Defense Fund California, a historic child advocacy organization chartered to ensure that every child is lifted out of poverty, protected from abuse/neglect and given access to health care, quality education and a moral foundation. Derric is also on the alumni board of his alma mater, Pitzer College.

As a National Urban Fellow, Derric earned his secondary master’s in public administration from Baruch College-City University of New York, completed a master’s in business management from Azusa Pacific University and earned his bachelor’s from Pitzer College.
“I’m appreciative of Crossroads for being bold and innovative and for having the intentionality to extend this Institute’s reach beyond the campus gates.”